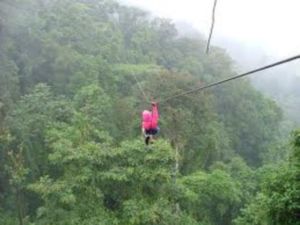 Zip line and aerial jungle canopy tours are among the most popular tourist attractions in Costa Rica, and those who overcome their fear of heights and surrender to their sense of adventure will have only fond memories of their time spent gliding from one section of the forest to another. Such are the memories a 90-year old woman from Texas now has to enjoy from her recent visit to Costa Rica.

DeAlva Mast recently received a touching tribute penned by her grandson Michael Able on the pages of the Stephenville Empire-Tribune, a daily newspaper in Central Texas. Ms. Mast has been a widow at the age of 53 in 1977, at which point she graduated from college and became a registered nurse. Decades later she became an administrator and later a nursing educator in the Lone Star State.

Fast-forward to the summer of 2013 and Ms. Mast was starting to feel the passage of time. Strokes, heart attacks and a bout of pneumonia landed her in a couple of hospitals in Texas, but after a couple of months of convalescence she was ready to resume her life and plan something special for her birthday. In October, Ms. Mast embarked on a Central American and Caribbean cruise along with her sister-in-law and four of her daughters. When her cruise ship pulled into Costa Rica as port of call, Ms. Mast decided to experience the iconic jungle zip line tours that the country is famous for -at the age of 90.

Age is not much of a problem when it comes to zip line tours in Costa Rica. In the past, Monteverde, Manuel Antonio and the Arenal Volcano areas were the go-to zip line and canopy tour destinations in Costa Rica, but in recent years the tropical dry forest of Guanacaste has gained popularity among visitors, particularly around the Rincon de la Vieja (Old Woman’s Corner) National Park. Here are some zip line adventures in Costa Rica that are worth experiencing: