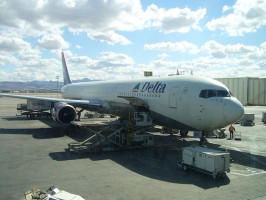 Passengers of Delta flight 325, which departed from Atlanta, were eager to land at the Juan Santamaria International Airport (SJO) yesterday; alas, the most active volcano in Costa Rica forced the aircraftto land in Nicaragua instead.

The ash column rising out of the Turrialba volcano, located in the Cartago province, has reached heights of 3,000 meters as the colossus releases geological energy. Meteorologists from the National Institute of Meteorology (Spanish initials: INM) issued a report that did not indicate the presence of ash on the SJO runway, and ground crews have not noticed any ash coating the surface instruments. Still, airlines are not taking any chances.

As reported yesterday, discount airline JetBlue indicated that refunds and rebookings were available due to volcanic conditions in Costa Rica. A press conference by SJO management yesterday issued a status report on the affected flights:

As previously reported by The Costa Rica Star, the Turrialba volcano has been in a hyperactive state that has deposited ash all over the Central Valley. This activity, which dates back to 2014, has previously prompted aviation officials to shut down SJO and enact a no-fly zone within a certain radius of the Turrialba crater; however, that has not been the case this time.

Some passengers diverted to LIR were actually happy to land in the province of Guanacaste since that was their ultimate destination. In general, landing at LIR may cost substantially more than landing at SJO. Even when factoring the cost of ground transportation, landing at SJO is often a cheaper option that is irresistible to many travelers from the United States.