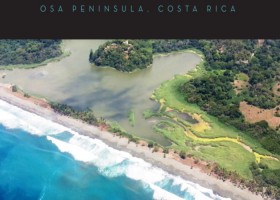 Acquiring large plots of land for the purpose of protecting ecosystems and preserving nature is one of the latest trends in real estate, and the Central American region is very attractive in this regard. Philanthropists such as business mogul Sir Richard Branson and former US Treasury Secretary Hank Paulson are involved in the direct funding of environmental conservation projects; others such as film director James Cameron, actor Ian Somerhalder and musician Lilly Allen use their star power to raise funds that benefit environmental conservancy, but others prefer a more hands-on approach.

Land conservation and habitat conservation are high on the agendas of a select few among the rich and famous. According to Inside Philanthropy, Carl Ferenbach, a legend of Wall Street’s private equity circles, owns a farm in Vermont that:

[produces] maple syrup, wood products and even grass for biofuel. [Ferenbach’s foundation has] conserved more than 700 acres of old farmland in Windham County, Vermont, buying up neglected land and restoring it to health for use in sustainable land management and farming. They work with the Vermont Land Trust to guarantee the properties will never be developed, and update facilities to be sustainable and more efficient. And, depending on the season, the farms sell their products—hay, maple syrup, timber, and in development, perennial grasses for use as heating fuel.

As recently reported by The Costa Rica Star, Hollywood star Leonardo DiCaprio once considered Costa Rica for an environmental conservation project. A few years ago, however, he chose Belize instead, and his ecologically conscious development project in Blackadore Cay recently made headlines in the New York Times:

In what may be his highest-impact leading role yet, the actor Leonardo DiCaprio, the Oscar-nominated “Wolf of Wall Street,” is planning to heal an island.

A well-known environmental activist, Mr. DiCaprio bought Blackadore Caye, 104 acres of wild, unpopulated land off the coast of Belize, with a partner soon after he set foot in the country a decade ago. Blackadore Caye has suffered from overfishing, an eroding coastline and the deforestation of its mangrove trees, and the partners mean to put it back to rights. [Villas] for guests on Blackadore Caye will be built atop a massive platform that stretches in an arc over the water, with artificial reefs and fish shelters underneath. A nursery on the island will grow indigenous marine grass to support a manatee conservation area, and mangrove trees will be replanted, replacing invasive species.

Belize and Costa Rica present attractive opportunities for those interested in environmentally responsible development projects, which may range from conservation to restoration and from ecotourism to sustainable farming. As previously reported by The Costa Rica Star, the Premiere Estates Auction Company has put together a special Caribbean Basin Auction of spectacular properties, and two listings stand out as being ideal for nature conservation.

Selva Nueva in the Osa Peninsula

This incredible 3,200 acre property is set between two magnificent lagoons, one salt water and one fresh water that flow into the Pacific Ocean. Bisected by the famous Rio Oro; Selva Nueva is bordered on one side by the 167 square mile Corcovado National Park and on the other by its 2.5 miles of beachfront. It contains over 2% of the world’s biodiversity—that’s more than all of North America combined.

Originally conceived as a nature reserve in Costa Rica, the property is nonetheless capable of supporting a sustainable development. A consultant group has identified hundreds of acres, from the beachfront to the mesas, on which to build without unduly affecting the flora and fauna.

8,493 acres nestled in the beautiful and vibrant coast of Belize are fully authorized with a master plan for up to 4,500 dwelling units (hotels, condominiums, villas), a marina with up to 400 boat slips, a golf course and a private airport of up to 7,000-foot runway.

Only 6 miles away from Leonardo DiCaprio’s dashingly beautiful Blackadore Caye, the value of this amazing property is its top location. Situated in proximity to the world famous barrier reef and being the closest land stop from Ambergris Caye, this property is complemented by existing tourism.