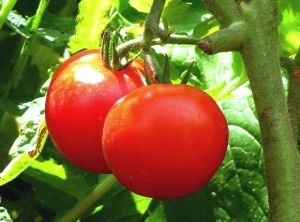 The idea for this article came from the Costa Rica Living Yahoo Group, where Monsanto was discussed in detail by members of the public at large around the world. We felt compelled to bring this discussion external from the closed forum on the Yahoo group to dispel any misconceptions. The Costa Rica Star does not have an opinion in this matter, we are neutral and non biased, the content below is the thoughts and opinions of the submitting author only. *Note that you have to sign in with your Yahoo account credentials in order to join the above mentioned Yahoo group and see the discussion threads.

The sun-kissed tomatoes shown in the picture accompanying this article were grown using principles of organic farming. This usually means that the use of synthetic fertilizers or pesticides has been avoided, that the crops have been rotated, that composting has taken place in the farm they are grown, or that other ancient techniques have been used from seed to harvest. They are not genetically modified, either. All these factors mean that agricultural biotech giant Monsanto did not make any money off those tomatoes.

Monsanto is a powerful multinational agribusiness enterprise based in the United States. Its headquarters office is in Missouri, but they have a presence in more than 50 countries around the world, but not in Costa Rica. In 2004, Monsanto unceremoniously withdrew from the country after succumbing to pressure from ecological and social organizations over the company’s Genetically Modified Organisms (GMO) business. Monsanto unsuccessfully courted the Abel Pacheco administration and the then-ruling Christian Social Unity, as well as the powerful National Liberation Party (PLN) to allow their GMO business to develop in Costa Rica; particularly its line of transgenic corn products like the YieldGard (MON 810) and the controversial MON 863 strain.

Transgenic products such as Monsanto’s MON 810 and MON 863 are developed with toxins that protect corn crops from diseases such as rootworm and other pests. This is a big marketing point for Monsanto: Corn farmers spend considerable time and money in eradicating pests and disease from their crops. Growing transgenic corn evokes visions of pesticide-free cultivation; something that farmers can turn into a selling point when presenting their products to consumers, and savings on pesticides that aren’t purchased and laid-off farmhands are also very attractive.

MON 810 and MON 863 have also been subject to scientific research that has shown great potential for harmful effects on the environment and the human health. Independent research has shown that consumption of MON 863 by laboratory rats caused negative effects to organs such as the heart, spleen and adrenal glands. Research funded by Monsanto has refuted such claims, and state-funded research studies in Australia, New Zealand and the European Union have determined MON 863 safe for human consumption.

Greenpeace activists and social groups in Germany studied the effects of MON 810 on the environment in 2009 and proved that the toxins released by the Monsanto product were efficient in eradicating organisms such as the corn moth, thereby affecting the delicate ecosystem created by corn fields. MON 810 was deemed environmentally disruptive by German legislators and banned from cultivation. It was this type of concern that lead Costa Rica to pressure Monsanto out of our country in 2004.

The latest turmoil surrounding Monsanto is unfolding in France, where President Nicolas Sarkozy has assured farmers that transgenic corn will not be grown on French soil. Monsanto and an alliance of agricultural biotech companies dedicated to the GMO business in Europe are currently clashing against farmers, grass-roots organizations and even governments. Despite the fact that MON 810 has been banned in several European countries, and that no farmer in Europe is even remotely interested in growing MON 863, Monsanto and other transgenic crop peddlers are unrelenting in their efforts.

The GMO crop business is highly lucrative and its profits are enjoyed by the most powerful, as evidenced in an embarrassing diplomatic cable revealed by WikiLeaks earlier this year. In 2007, agricultural groups across Europe began to fight Monsanto’s aggressive GMO campaign, borrowing a page from recent history in Costa Rica.  Craig Stapleton, a George W. Bush supporter and Ambassador to France at the time, wrote an amazing communique to his bosses at the State Department recommending what he thought America should do to protect the interests of companies like Monsanto in Europe:

“[The diplomatic corps in Paris] recommends that we calibrate a target retaliation list that causes some pain across the EU since this is a collective responsibility, but that also focuses in part on the worst culprits. The list should be measured rather than vicious and must be sustainable over the long term, since we should not expect an early victory. Moving to retaliation will make clear that the current path has real costs to EU interests and could help strengthen European pro-biotech voices.”

For the record, Stapleton was co-owner of the Texas Rangers baseball team with George W. Bush.

It is unclear exactly what the U.S. government could expect from conducting such a campaign, but Monsanto has a lengthy history of having ties to the Food and Drug Administration in the United States.

The Tico Position Against GMOs

The bulk of the research studies showing the potential harm of GMO products had not been released before Monsanto was pressured into leaving Costa Rica. The problem with GMOs is that they essentially work against the strong conservation vision that Ticos have adopted since the 1970s. The image of Monsanto infiltrating government and political channels to sell their products is certainly spine-chilling, and the GMO concept does not fit into Costa Rica’s plans for organic farming.

Organically-grown produce can be found just about anywhere in Costa Rica, from weekend farmers markets to places like the Finca Luna Nueva Lodge in San Isidro de Penas Blancas. Not all produce will be 100 percent organic; some farmers make sporadic use of store-bought fertilizers and insecticides or herbicides, and composting is not practiced at all farms. Some landowners who are new to the lucrative world of pineapple exports rush to plant and harvest without rotating their crops, and in a few years they are stuck with barren land where only cilantro will grow.

To be fair to Monsanto, some of their products can still be found in Costa Rica. Some farmers and gardeners may still use the popular Roundup line of herbicides, and some chemical fertilizers may be found here and there, but they aren’t widely used; they are rather used occasionally and very sparingly by small farmers. The sporadic use of Monsanto fertilizer or weed killer in very small amounts once a season will not cause damage if the other organic farming principles are used. There are, of course, organic alternatives like the old vinegar-salt combo herbicide and compost-made fertilizers.

The use of GMOs in mass farming operations, however, is a game-changer that not only goes against organic farming, but also against sustainability. Ticos do not wish to allow GMO cultivation in our lands because of their disruptive effects to ecosystems. There is a reason why insects, worms, bacteria and other bichillos flock to corn:  they need to eat, too. Nature sent those bichillos to the corn fields, and she knows why. In this regard, organic farmers know that a surge in pests and corn disease is a sign that they aren’t doing something right.

Monsanto is clearly no stranger to protests and resistance, but the fact that the powerful multinational company decided to completely pull out of Costa Rica is a testament to the Ticos’ vision of how our country and her precious ecological and agricultural resources should be treated.

To get the full story on why Monsanto GMOs are not grown in our soil, you may want to read the detailed report from Alexandra E. Tuinstra Gomez (PDF, 60 pages).  The Costa Rica Star values your input; please feel free to tell us how you feel about genetically modified crops.