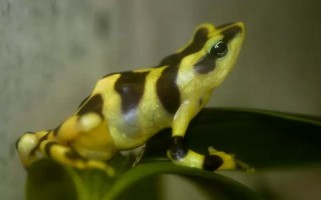 It has become almost fashionable to cite phenomena such as loss of habitat and climate change as the major causal agents for the extinction of certain wildlife species in Costa Rica. Such is the case of the golden toad as well as the harlequin frog and the hawksbill sea turtle (it is important to note, however, that biologists have recently observed a return of the latter two “Lazarus species” in Costa Rica).

A new study by Canadian researchers suggests that size and biodiversity may also play a factor in amphibian extinction in areas of Costa Rica where nature conservation is strictly enforced. Here’s the official press release on this matter:

(PressZoom) – TORONTO , ON – A new University of Toronto study may force scientists to rethink what is behind the mass extinction of amphibians occurring worldwide in the face of climate change, disease and habitat loss.

The old cliché “size matters” is in fact the gist of the findings by graduate student Stephen De Lisle and Professor Locke Rowe of U of T’s Department of Ecology & Evolutionary Biology in a paper published today in Proceedings of the Royal Society B.

By examining research on global patterns of amphibian diversification over hundreds of millions of years, De Lisle and Rowe discovered that “sexually dimorphic” species – those in which males and females differ in size, for example – are at lower risk of extinction and better able to adapt to diverse environments.

Their work suggests the ability of males and females in sexually dimorphic amphibian species to independently evolve different traits – such as size – helps them survive extinction threats that kill off others, says De Lisle.

He says classic ecological theory would not have predicted that about amphibians, a class of vertebrates that includes frogs, toads, salamanders, newts and caecilians.

The conventional school of thought believes different-sized sexes of the same species take up more resources and are less able to adapt and diversify than species where ecologically relevant traits like size are basically the same between males and females.

“I think if our results bear on mass extinction at all, it suggests we maybe should start looking more closely at the traits of some of the species that are going extinct,” says De Lisle.

While peacock feathers or deer antlers are understood to help males of those species successfully mate, less is understood about amphibians, which are being wiped out so fast many are going extinct before scientists can identify them.

Some estimate between 30 and 40 per cent of the world’s approximately 7,000 species of amphibians are currently in danger of extinction – more than any other animals on earth – and their decline is a critical threat to global biodiversity.

Many scientists believe amphibians serve as “canaries in a coal mine,” and declines in their populations indicate other groups of animals and plants will soon be at risk.

Amphibians are not only an important part of the food chain and biodiversity. Some have chemicals in their skins that can be developed into medicines to fight diseases such as cancer and perhaps even AIDS.

Because their skins are highly permeable and they have a two-staged life cycle that starts in water and then moves to land, amphibians may be more susceptible to temperature changes, water and air pollution than other animals.

The new study by De Lisle and Rowe adds another piece to the puzzle about why some species are doing well while others are in decline or disappearing.

For example, both the golden toad and the harlequin frog of Costa Rica’s Monteverde Cloud Forest Preserve disappeared completely in the late 1980s despite living in what was considered a pristine habitat.

“Our work suggests we still maybe don’t have the best understanding of what traits might be influencing these extinctions, although now we have the understanding that sexual dimorphism is an important trait,” says De Lisle.