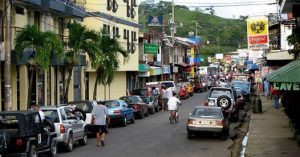 A group of residents in the small Central Pacific port town of Quepos, bordering the popular tourist destination Manuel Antonio National Park, have come together to seek to increase safety on the streets.

The initiative, “Quepos Seguro, Quepos Libre” (A Safe and Free Quepos), held a kick-off meeting Monday afternoon at the site of the weekly local farmer’s market. Their Facebook page already has some 2,200 followers.

Organizers say they lack sufficient support from the Municipality of Quepos and the police force to handle growing delinquency and drug problems, according to a report in Costa Rica’s Spanish-language online news site, CRHoy.com.

According to Wilberth Otárola, a neighbor of the area, the wave of crime and drugs in the area has caused local residents to lose their sense of security.

“You feel like your hands are tied – you can’t leave your car parked at the beach because the windows may get broken. It is people who come from outside, the situation at night is difficult and people have lost their sense of peace. Because we don’t feel the support of the municipality and the police, we as residents want to meet and find solutions,” said Wilberth Otárola, a neighbor of the area, and leader of Quepos Seguro.

Otárola said the problems are mainly concentrated in the downtown Quepos area. However he said that criminals have taken up residence on a hillside near the fairground.

The community leader said their group will march on September 29 to coincide with the county’s annual celebration in order to draw attention to local officials on the problems and seek their support.

The initiative has brought together hundreds of residents of all ages so far who wish to reclaim the safety of the streets in Quepos.