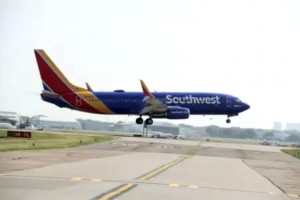 “Connecting Los Angeles to Costa Rica’s growing resort and ecotourism region brings to the market a value only Southwest can offer,” said Cullen. “Our service to Liberia/Guanacaste marks the beginning of our international story here at LAX, as we continue to explore more destinations for our L.A. Basin Customers.”

“Today, the first Southwest flight destined for Costa Rica will depart from LAX, our city’s economic engine and gateway to the world,” said Mayor Garcetti.  “The airline’s first international route out of L.A. will strengthen the exchange of cultures and commerce that makes this such a diverse, and dynamic, global city.”

“As the busiest origin and destination airport in the world, LAX’s partnership with Southwest helps to create additional choices for travelers,” said Board of Airport Commissioners President Sean Burton. “Today’s launch of international service to Liberia, Costa Rica helps to ensure that we are maintaining a strong base of service and airline market profile.”

The carrier’s initial flight schedule of one flight daily in each direction also brings connectivity between Liberia/Guanacaste and cities on the Southwest network, including Oakland, Phoenix, and Las Vegas. A brand standard with Southwest for more than four decades, every seat on every flight comes with an unparalleled combination of reliable Customer Service and value.

“Southwest passengers arriving for their international flight to Costa Rica will experience the already transformed Terminal 1, as part of the $508 million dollars being invested in Terminal 1,” said LAWA Chief Executive Office Deborah Flint.  “Passengers can expect fresh, modern facilities; amenities such as new seating with chargers; and new dining and shopping opportunities which all speak to our focus on providing an exceptional experience.”

Southwest Airlines began flying to California in 1982 and now serves nine airports in the Golden State, with service beginning at its tenth California airport, Long Beach (LGB), on June 5. Offering more daily departures in California than any other airline, 324 of those flights will take off and land within the state this summer, connecting 20 unique city-pair combinations within California. Southwest’s ten California airports will offer Customers a combined peak weekday schedule of 683 departures a day to destinations across the United States, Mexico, and Costa Rica.