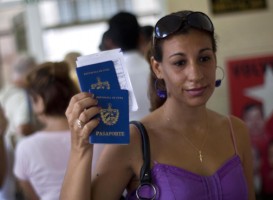 San Jose, Nov 19 (EFE; additional reporting by The Costa Rica Star).- The Costa Rican government reported Thursday that foreign ministers from a dozen countries in the region will meet next week in El Salvador to find a solution to the emigration of thousands of Cubans trying to reach the United States, about 2,400 of whom are stranded in Costa Rica.

“It was agreed that the convening on Monday, Nov. 23 of the Council of Foreign Relations Ministers of SICA (the Central American Integration System) will be broadened to other involved countries, such as Cuba, Ecuador, Colombia and Mexico,” said the Costa Rican Foreign Ministry in a statement.

Costa Rica said Thursday that it proposed to the SICA Security Commission, meeting in El Salvador, viewing as a priority the situation of Cuban emigrants in the region and that that proposal was “accepted by the membership.”

“The delegates agreed on the need to view this issue from a comprehensive and human rights perspective and not as a security matter, to avoid criminalizing migration between our countries,” the Foreign Ministry said.

Costa Rican Foreign Minister Manuel Gonzalez said in the announcement that “the countries have reacted in a positive way and with solidarity” to the situation.

Before confirming the ministerial meeting, Gonzalez held a press conference at which he emphasized the importance of holding the meeting to seek mechanisms that will guarantee the human rights and safety of the emigrants.

Gonzalez said that the aim is to seek an “immediate” solution to the problem being experienced by Costa Rica after hundreds of Cuban migrants were denied entry into Nicaragua by Managua and have remained stranded near the border.

But also, he said, the foreign ministers will discuss “long-term” solutions to the problem of Cuban emigration.

“These people come under irregular circumstances (brought) by people-trafficking mafias and they are putting their lives at risk under deplorable conditions on a journey of thousands of kilometers. As states, we must deal with it in a comprehensive way,” Gonzalez said.

Since last Saturday, Costa Rica has provided about 2,400 temporary visas to Cuban citizens who arrived by land at the border with Panama and are trying to cross through the country en route to the United States.

Those Cubans left Cuba legally by air for Ecuador, where they are not required to have a visa, and from there they traveled illegally through Colombia and Panama until they got to Costa Rica.

Some 1,400 Cubans have gathered at the border between Costa Rica and Nicaragua because Managua has refused to allow them entry.

Some 800 of the migrants were repelled by the Nicaraguan army and police last Sunday and returned to Costa Rica after illegally entering Nicaragua.

Costa Rica has set up six shelters near the border with Nicaragua to provide humanitarian assistance to the Cubans. EFE

According to reports broadcast by national news radio station Radio Columbia 98.7 FM, some of the shelters are located in the municipality of Liberia, where the local chapter of the National Committee on Emergencies has reported that they are running low on food and supplies.

Director of Immigration Katia Rodriguez explained that the transit visas granted to the Cuban migrants will be extended until a solution has been formulated by the bloc.

The U.S. Embassy in San Jose has pledged to assist Costa Rica with all humanitarian efforts to shelter the migrants.

Laura Dogu, U.S. Ambassador to Nicaragua, explained that the migrants will be given asylum if they reach the U.S., and she added transit nations are responsible for protecting these asylum seekers.

Ambassador Dogu believes that it is important to talk to all transit nations, not just Nicaragua, about this matter. The latest path sought by Cuban migrants starts in Ecuador and continues through Colombia and Panama before reaching Costa Rica.