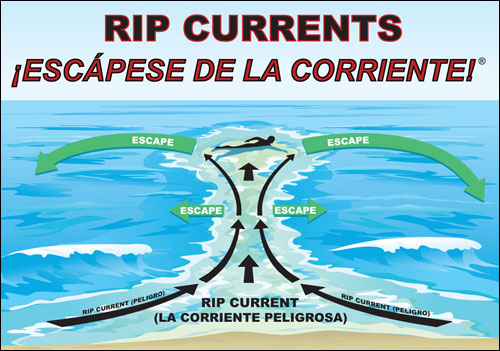 The poor decision when a group of 5 teenagers went swimming in Playa Espadilla, Manuel Antonio this Saturday night despite the heavy rain, cost one of them his life, while two others have not yet been found.

The identity of the dead minor has not been revealed at this point. The emergency took place close to 8 p.m. this Saturday, May 6. Costa Rica’s Red Cross and the Quepos Coast Guard were able to rescue two of them alive, but have not been able to locate the other two. The search began again at 6 a.m. this morning but as of 9 a.m. there were no positive results.

Heavy rain was falling in this area yesterday for several hours; the group of teens were presumably dragged by a strong riptide.

The beaches located between Caldera and Quepos are known to be significantly dangerous, mostly because of the presence of rip currents.

Authorities urge visitors to follow the safety rules, there are usually signs at every beach clearly establishing the areas where it is dangerous to swim. Swimming during a storm or alone in an isolated beach or late at night is a big danger. Swimming near a river mouth should also be avoided.

Authorities and volunteers continued with the search of the two teenagers that were dragged by the a rip current 24 hours ago, unfortunately the bodies have not been found yet.

One of the survivors explained that a group of friends decided last minute to go to the beach, they were celebrating his birthday, according to him they were just hanging out, they were not drinking alcohol or using drugs; while they were in the ocean a wave dragged them in, three of their friends were unable to escape the current. All of them were local kids with ages between 13 and 17. The two missing are Stephano Porras (13-years-old) and Josué Vargs (16 years-old)