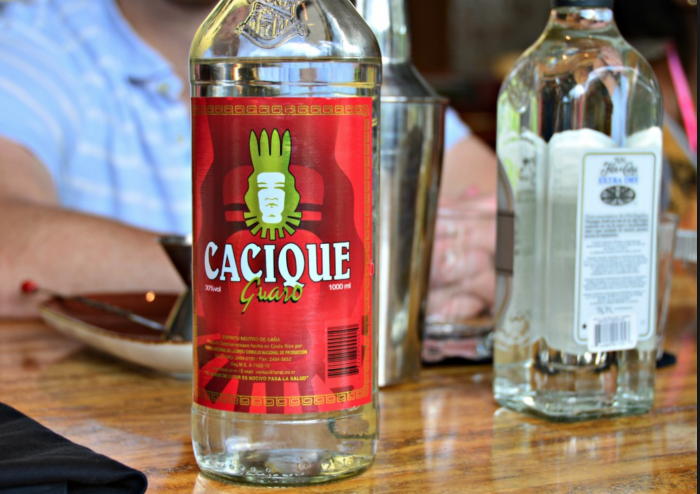 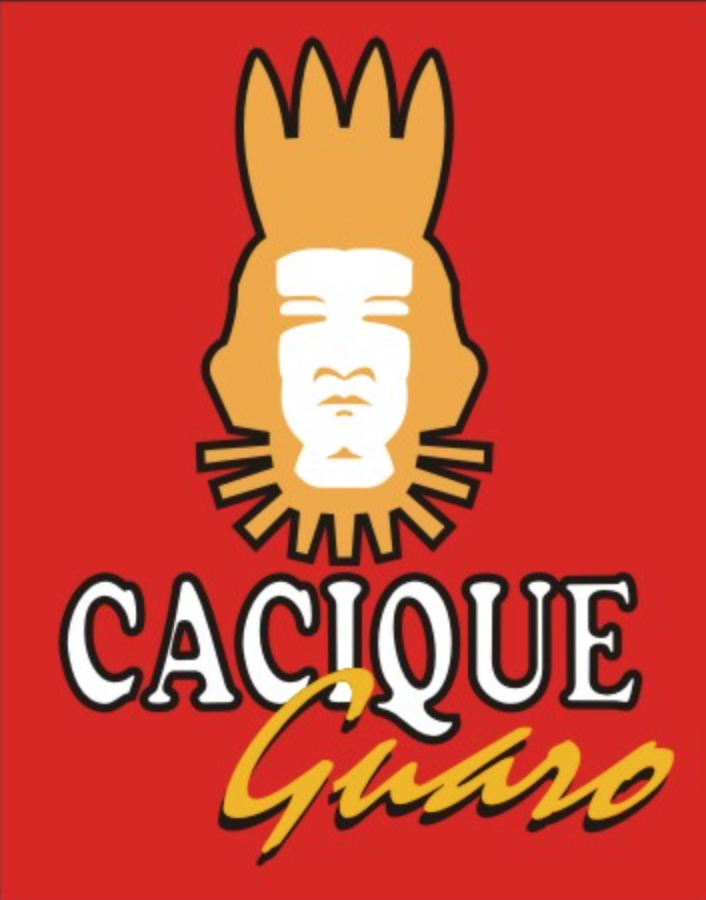 Popular throughout Central American countries, though not readily available in the USA, “Guaro” is a distilled liquor originating in Costa Rica.

Manufactured from sugar cane juice, Guaro has a high alcohol content, clear coloring and a strong but slightly sweet flavor. Most commonly mixed with fruit juice or soda (Fresca being a favorite), few people choose to consume this liquor in straight shots. Referred to as an “aguardiente,” the words “agua” and “ardiente” when combined translate to basically mean Guaro is “burning water”. A fairly accurate description if you ask me! Once considered the “moonshine” or “chicha” of Central America, Guaro is no longer a product of homemade stills, but an almost patriotic part of Costa Rican popular culture.

In an attempt to end the kitchen sink production of clandestine “Guaro”, the Costa Rican government approved the manufacturing and eventual bottling of the clear liquor by Costa Rica’s National Liquor Factory (la Fábrica Nacional de Licores or “FANAL”) back in 1851. At that time it was sold in barrels via “liquor agencies”, with the clients providing their own container.

Starting in 1980, a new division was created in FANAL, with “Cacique” becoming the official Guaro brand name in Costa Rica. With it’s distinctive red label and iconic Indian Chief (that’s what “Cacique” means….Chief), Cacique quickly became the more commonly used name, since “Guaro” can often times refer to almost any distilled spirit. Easily one of Costa Rica’s most popular “beverages”, bottles of Cacique line the shelves of every Costa Rican grocery store and bar in even the most remote corner of this country, including every Costa Rican Hotel and Restaurant.

FANAL originally decided to market this popular liquor in 1 liter glass bottles containing a lower alcoholic content then vodka, but with the continued growth in popularity, they later began providing consumers with the options of 750 ml glass bottles and 365 ml “pachitas”….or plastic bottles (the handy travel size!).

FANAL takes great pride in producing a high quality product of licensed ethyl alcohol, guaranteeing a high purity for “safe” drinking. The brand has proven so popular, that over the years it has expanded from only 60 proof Guaro Cacique (with the red label) to the 70 proof Cacique Superior (with the black label), the latter offering an even higher purity of “rubbing alcohol” via further filtered purification through activated carbon and increasing not only it’s purity, but perfecting it’s mostly neutral aroma. They also produce a lesser known black label, offering a whopping 80 proof and referred to as “Super Caňita” (Super Cane)!

Origin of the Name:

The present name of Guaro as “Cacique” (or “Chief”) is thought to originate from FANAL. Since several circumstances. Between 1977 and 1980 an excavation made by the Costa Rica National Museum revealed one of the largest indigenous settlements to date near the town of Grecia on land that occupied by the liquor distillery had remained for decades as one of Costa Rica’s most enduring and popular products, indigenous societies considered their “leaders” to be their “Chiefs”, thus the name “Cacique” stuck. Often times referred to as “Cuatro Plumas” in joking reference to the Four Feathers on the chief’s headress found on the ubiquitous red labels, just saying the word “Guaro” brings smiles to almost every Tico’s face!

Over the years, Guaro’s popularity has reached international proportions. New companies have opened making their own brands of “pirated” Guaro recipes and attempting to market this “poor man’s vodka”, as the newest upscale spirit. No worries though. With the ease of the internet you can now buy the “real” Costa Rican Guaro and not at over inflated prices! Check out the website www.guaroliquor.com for purchasing details, as well as their page dedicated to some of the best Guaro recipes I have found. (Not that I haven’t invented a few of my own over the years!)

Now, some 160 years later, Guaro continues to be as popular as ever! In fact, this liquor is such an integral part of Costa Rican culture that a recent exhibit at the Museos del Banco Central (Central Bank Museum) featured one work representing three icons of daily Costa Rican life; Cacique Guaro, a Soccer Ball and a representation of the celebrated Black Virgin!

For those of you lucky enough to be visiting beautiful Costa Rica, a little word of warning….. the pronunciation of “water” has been known to be misinterpreted as “guaro” by eager waiters not completely versed in the English language. This has led to incidences where thirsty American tourists having asked their waiter for a glass of water and the waiter, ever so happy that the tourists wanted to try his country’s famous Guaro returned from the kitchen with a glass of the clear beverage. The tourist innocently takes a generous swallow and have experienced a coughing and sputtering surprise in Costa Rican thirst-quenching. Consider yourself warned.

Kimberly Barron, originally from Malibu, California has lived in Parismina and Manuel Antonio, Costa Rica for 20 years. Starting as a certified tour guide, she spent 15 years managing fishing lodges on the Caribbean Coast and later 4* & 5* Hotels on the Pacific Coast of Costa Rica. Currently semi-retired, Kimberly still works as the Marketing Director for Byblos Resort & Casino and Hotel Makanda by the Sea. 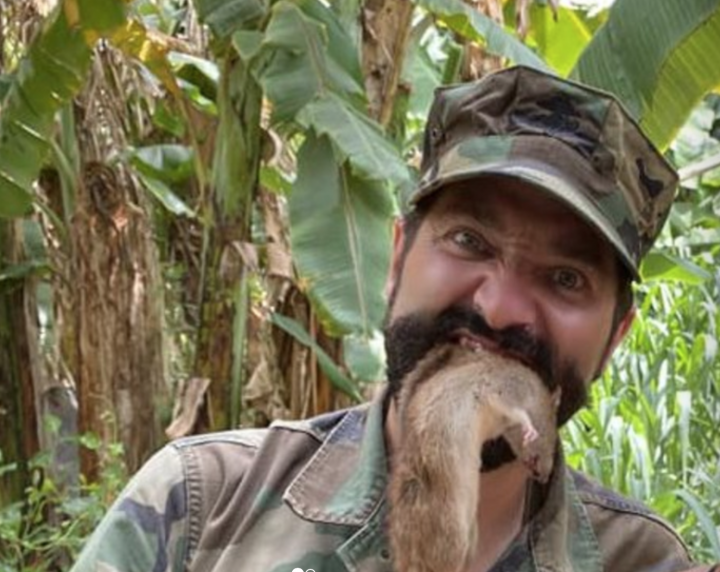 On the weekend of September 20th, photos of the Spanish couple Pedro and Silvia Sierra went viral. They [...] 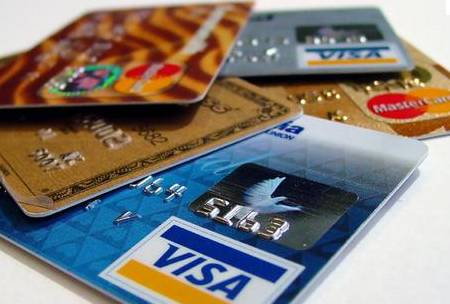 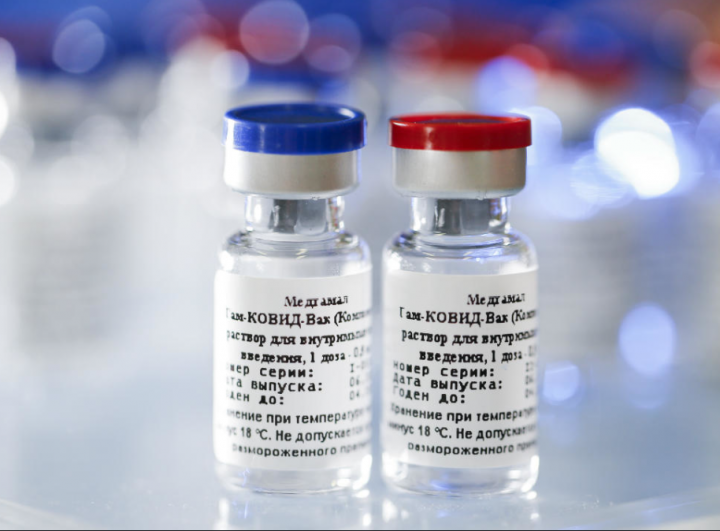 At a press conference on September 21 at the Casa Presidencial in San Jose, it was announced that Costa [...]

The Ministry of Health confirmed 1,087 new cases of Covid-19 positive patients for a grand total of [...]