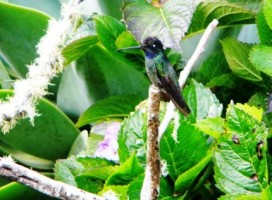 Educational and scientific tourism are becoming very important  in the lucrative travel and hospitality sector in Costa Rica. To this end, it is not surprising to learn that a good number of university students from the United States make Costa Rica their first choice for study-abroad programs within the scientific curriculum.

A good example of the type of educational and scientific tourism that Costa Rica is intent on attracting would be Hannah Steinberg of Wesleyan University, a prestigious institute of higher learning in Connecticut.

Miss Steinberg was in Costa Rica in 2014 thanks to a study-abroad option offered by her school, and the country suited her intentions of improving her Spanish language skills as well as performing biological field research. She chose the lovely colibrís (hummingbirds), which are abundant in the cloud forest regions of Costa Rica. In a recent interview with [email protected], Miss Steinberg explained her work and provided fascinating insight from her conclusions:

My research project was part of an ongoing study of the ecology of hummingbirds in the cloud forests of Costa Rica, and more specifically, the various effects of artificial hummingbird feeders on their ecology. You can find what they call “hummingbird galleries” in many public national parks and private nature reserves throughout the country. These feeders can be good because they attract tourists and raise ecotourism revenues. However, they can also have many negative effects on hummingbirds and their surrounding environment. For instance, hummingbirds are important pollinators, but have been shown to feed so much at some feeders that surrounding flowers do not get pollinated. I chose to specifically focus on how these artificial feeders foster interactions between hummingbird species and affect hummingbird diversity in Monteverde, Costa Rica.

My research showed that although the same species of hummingbirds were found where artificial feeders were permanent and where they were not, species evenness was much lower where the hummingbird gallery was present. The term species evenness refers to the relative abundances of each species in an ecosystem, and is a major factor in determining species diversity (along with number of species).

Furthermore, I found that there were significantly more negative interactions between hummingbirds where there are permanent artificial feeders. I suggested that this is what drove more dominant species to become more abundant near the hummingbird gallery, thus decreasing the abundance of rarer species and decreasing species diversity. Biodiversity is one of the main indicators of ecological health. So in short, the hummingbird feeders that are set up in Monteverde are damaging the ecological health of an area acclaimed for its commitment to environmental conservation.