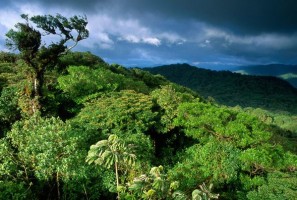 The group in Costa Rica studied the ecology of cloud forests, and one student group studied the head-width of leaf-cutter ants to determine if having a broader head plays a role in each ant’s ability to transport segments of leaves. Other student groups conducted research on topics such as territorial vocalizations in hummingbirds, predator attacks on coral snakes and their mimics, stomata densities near holes in the leaves of monstera, also known as Swiss cheese plants, and arthropod diversity in small pools within bromeliads, another type of plant.

“Bromeliads grow in such a way that their leaves collect pools of water in the canopy, and this water collects nutrients and insects for the plant from its environment,” said Josh Shirley, a UNG biology student. “We wanted to study these pools, to catalogue the organism diversity within them and within the plants themselves. We found great diversity in the bromeliads — we didn’t find any macrovertebrates such as frogs, but found many insects. Because deforestation can destroy these habitats, it’s important to know what organisms are living in these environments, as insects and other small organisms play many crucial roles in nature.”

In Belize, Dr. Nancy Dalman, head of the Department of Biology, and Jill Schulze, assistant dean of the College of Science & Mathematics, taught a course on tropical reef ecology in the waters of Calabash Caye, which contains an array of animals, including lionfish, the red-footed booby and various species of coral.

During the course students had the opportunity to snorkel in the Meso-American Reef, the world’s second-largest barrier reef, and explore the Great Blue Hole, a sinkhole in the Lighthouse Reef that is more than 1,000 feet wide and 400 feet deep.

UNG student Kelsee Ryan studied a type of single-celled organism called zooxanthellae that are symbiotic with the coral in which they live. Her goal was to observe the relationship between each organism.

“Zooxanthellae are a keystone species for the reef due to their importance in the construction, evolution and ecology of the reef. Zooxanthellae act as the power plant, personal chef and cleanup crew for their symbiotic host,” Ryan wrote in her blog during the trip. “They provide food for the host by converting the host’s waste as well as the energy zooxanthellae creates from photosynthesis into a usable energy form for the host, and in return the zooxanthellae are provided with a home, all of which I was able to observe.”