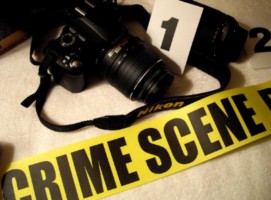 A 17-year old male was calmly taken into custody after he allegedly murdered his stepfather to put an end to a pattern of spousal abuse in Costa Rica. According to a news report filed by Alejandro Monge of national newspaper La Prensa Libre, the 42-year old victim was identified by the last names Ugalde Cruz.

The incident occurred in La Fortuna, located in the San Carlos canton of the province of Alajuela. La Fortuna is one of the most visited regions of Costa Rica thanks to its many ecotourism attractions such as the Arenal volcano, its lake and the surrounding cloud forest. As it happens, the killing specifically occurred in front of the cemetery in the district of La Tigra.

According to statements made by the regional director of Fuerza Publica, the national police force of Costa Rica, officers were en route to investigate reports of a domestic violence situation at an address were such problems were previously known. When the officers arrived on scene, a rescue unit from the Red Cross had already responded and determined that they could not revive the stepfather, who suffered numerous stabbing wounds on his back.

Detectives from the Office of Judicial Investigations (Spanish initials: OIJ) are looking into the incident. Preliminary information suggests that the suspect had previously defended his mother against violent attacks perpetrated by her spouse. According to neighbors, there were no signs of abuse when the single mother lived with her son; the problems began when the late stepfather moved in.

Male teenagers taking violent actions against abusive stepfathers in Costa Rica is an unfortunate trend that dates back to the 20th century and seems to be on the rise as the socioeconomic issue of young single motherhood persists. In a 2014 feature published by The Costa Rica Star; this issue was discussed at length, particularly with regard to the effect it has on boys being raised by single mothers and the underlying hatred they harbor:

In English-speaking countries, there’s a pessimistic belief that boys who are raised in single mother households are more likely to end up in the army or in prison as they become adults. This concept was explored by author Chuck Palahniuk in his novel Fight Club, which was made into a film starring Brad Pitt and Edward Norton in 1999. At an elucidating moment in the story, there is a discussion about masculinity and how boys raised without a dependable model of manhood could become overly protective of women and extremely spiteful of men.

The concept can be roughly explained as follows: Boys raised without a father see their mothers struggle to raise them by themselves. If they eventually learn that their fathers are absent because they wanted to be absent, they will get angry at this knowledge. Without positive male figures in the lives, these boys’ unchecked anger may turn into resentment and hate towards other males. They will grow up to love and admire their mothers to an extent that will make them protectors of women and loathers of men. This hatred of males that are not in their social circles could be dangerous when combined with violence, aggression and challenging socioeconomic conditions.

A description of the world of Fight Club in the novel is as follows:

“What you see at fight club is a generation of men raised by women.”

Basically, the members of the Fight Club secret society are men who did not learn how to be men. There were many crucial aspects of manhood that they did not assimilate from their absent fathers, whom they learned to hate anyway. Fight Club is a way to channel this pent-up aggression. In real life, you have the army or crime; however, Costa Rica proudly abolished her army more than six decades ago, so there goes that outlet.

An example of what could happen to boys raised by single mothers and without a good role model to teach about masculinity is explained in the excellent book Marcos Ramirez, a roman à clef written by Carlos Luis Fallas of Mamita Yunai fame. Marcos Ramirez is essentially Huckleberry Finn and Catcher in the Rye rolled into one, but the complete absence of a biological father and the worthless presence of a stepfather who is marginally a man in the same biological sense leads to disaster. Since Marcos Ramirez is born in Alajuela in early 1909, Costa Rica did have an army then; which is where young Marcos ended up after a tumultuous boyhood that planted a seed of anger as he witnessed the struggle and anguish of his mother to raise him by herself in abject poverty.

After coming back from the skirmishes of the Coto War of 1921, whereupon Costa Rica lost 50 soldiers and ceded back the island of Bocas del Toro to Panama, a nation which in turn would lose part of her territory to the United States under an interventionist policy, young Marcos moved from Alajuela to the turbulent southern suburbs of San Jose, where he supported his mother and his young sisters who seemed to be born each year, and whose fathers he often resented because they were absent. Marcos goes on to make friends with neighborhood miscreants also raised by single mothers, and he gets his first taste of violence and petty crime. It does not take long for Marcos to get into serious trouble, which could have meant a term in prison; however, he goes on the lam to Limon to become a nobody -just another worker in the banana plantations.

What can single mothers in Costa Rica do to prevent their sons falling to the plots of Marcos Ramirez or Fight Club? To this effect, the government offers various social programs that are determined by Public Law 7735 “Protection of Adolescent Mothers.” Funding for these programs is paltry; less than $400,000 were made available to place young mothers in fast-track vocational programs with guaranteed employment in 2013. Considering that Costa Rica sees about 14,000 teenage moms each year, the magnitude of this issue is not being addressed adequately.